In a world where everything changes so rapidly, few faces have the wow effect and the chance to be remembered for long. With an intellect that transcends her years and incredible versatility of beauty, Alena Blohm has built an enduring modeling career that seems fated. Her rise to the upper echelons of Fashion reads like the archetypal fashion fairytale.

Blohm grew up in the small municipality of Weyhe in the district of Diepholz, Lower Saxony, Germany. It was, she calls 'an amazing childhood'. "I love going back and being at my mom's house where I grew up. It still feels like home. I love to jump on my Bicycle and drive around and realize that nothing really has changed. It's really comforting" she muses.

At sixteen years old, Blohm was discovered at a street casting for a production in her hometown. The Photographer of the shoot showed her photos to his husband Patrick Lazhar, who has been working for Model Management (Hamburg) one of Germany's most renowned agencies for more than 25 years and the rest is history. 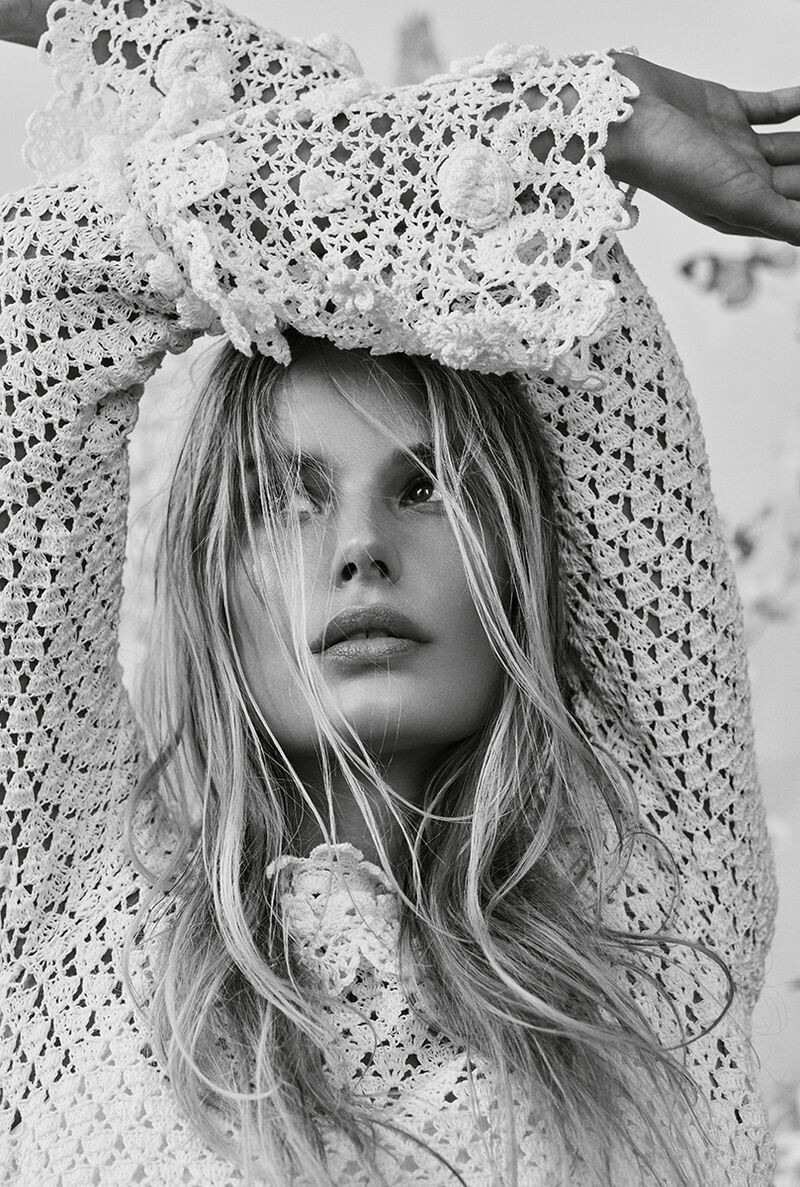 Lazhar recalls the day he saw Blohm for the first time and noticed her incredible photogeneity "I will never forget the day my husband (who is a photographer), showed me photos of a young girl that was discovered at a street casting for one of his productions. Her individual beauty was jaw-dropping, and the very next morning I was in contact with her to set up an appointment at Model Management, although her initial plan was an apprenticeship at Mercedes. Shortly after, this beautiful kid, joined by her grandmother, came into the agency to meet us. Everyone was immediately in love with her personality and was impressed by her natural beauty. Flawless skin and body with the cutest gap between her teeth. This young stunner was Alena and the rest is history!"

When she started out, Blohm only modeled over summer breaks because she was still in high school and it was the only time she could travel. "I finished school first and then went into full-time modeling when I was 18. I think it's important to concentrate on one thing at a time and my parents were very strict about giving 100% in school." 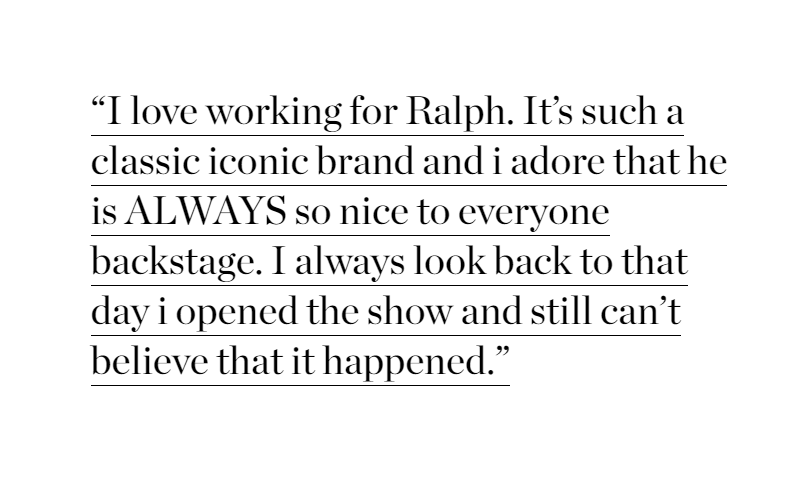 Blohm's foray into Fashion was supported by her family, her grandmother in particular, who encouraged her development. "Yes definitely. I love how open-minded she is, and she taught me to do the same and see the world in a different light. I love my Grams," she says. 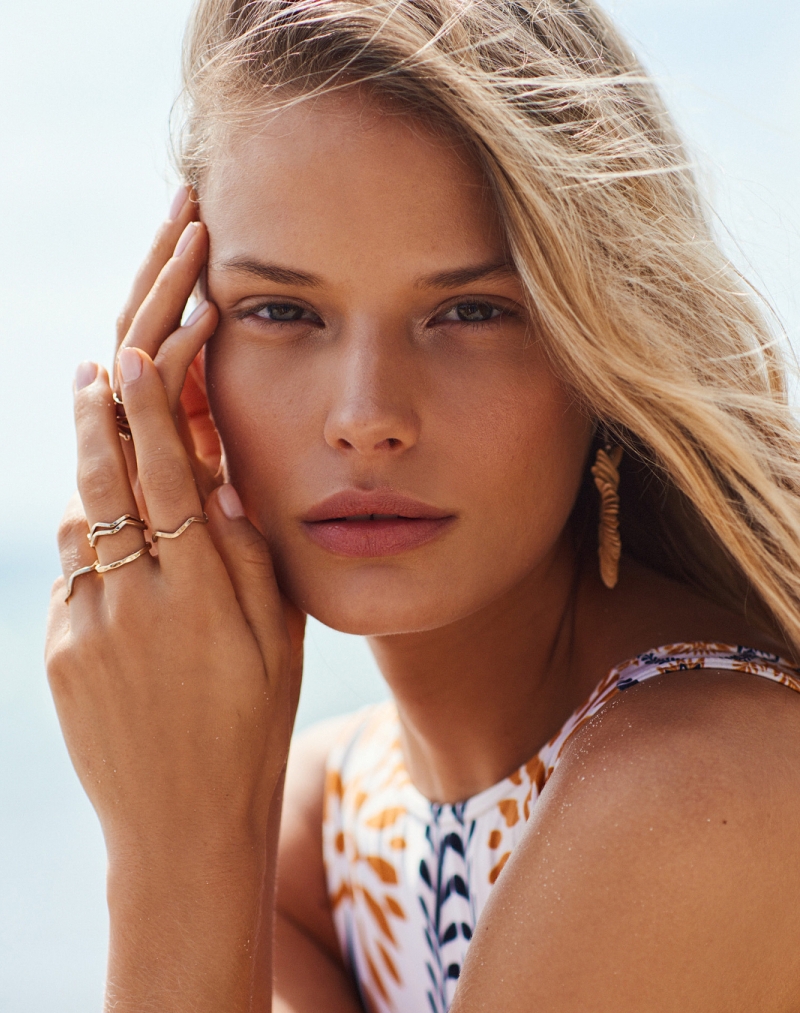 For its 2014 show in New York designer Ralph Lauren chose Blohm personally and she opened the show. She immediately made standing out from the crowd look entirely effortless and it became her breakthrough. Soon, the 2016 Polo Ralph Lauren advertising campaign followed and Blohm who was in high demand went on to find favor on the international runway circuit, making her way through Europe's big houses. "I love working for Ralph. It's such a classic iconic brand and I adore that he is ALWAYS so nice to everyone backstage. I always look back to that day I opened the show and still can't believe that it happened."

She continued her streak with campaigns for fashion powerhouses (Lanvin, Jeremy Scott, Moschino and Forever 21 to name a few) and featured in major Fashion glossies (Vogue Paris, i-D, Harper's Bazaar Paris and Elle Russia to name a few). She soon became an iconic presence in her country alongside the likes of Heidi Klum, Claudia Schiffer, and Toni Garrn. However, over the course of her career, the momentum appears to have propelled her towards key editorial and campaign bookings. "Since I started, I always worked more on the Advertising side rather than the runway. And I'm not mad about it. The runway shows are stressful, and I personally love photoshoots." 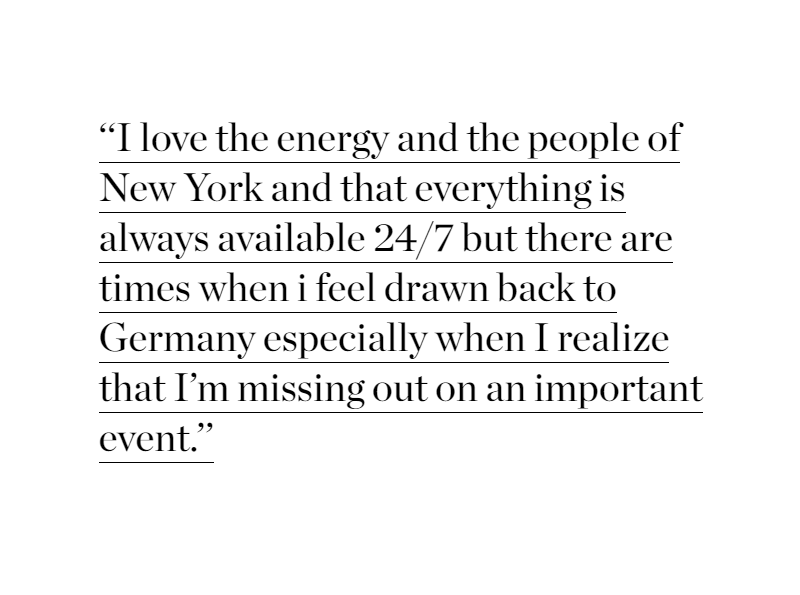 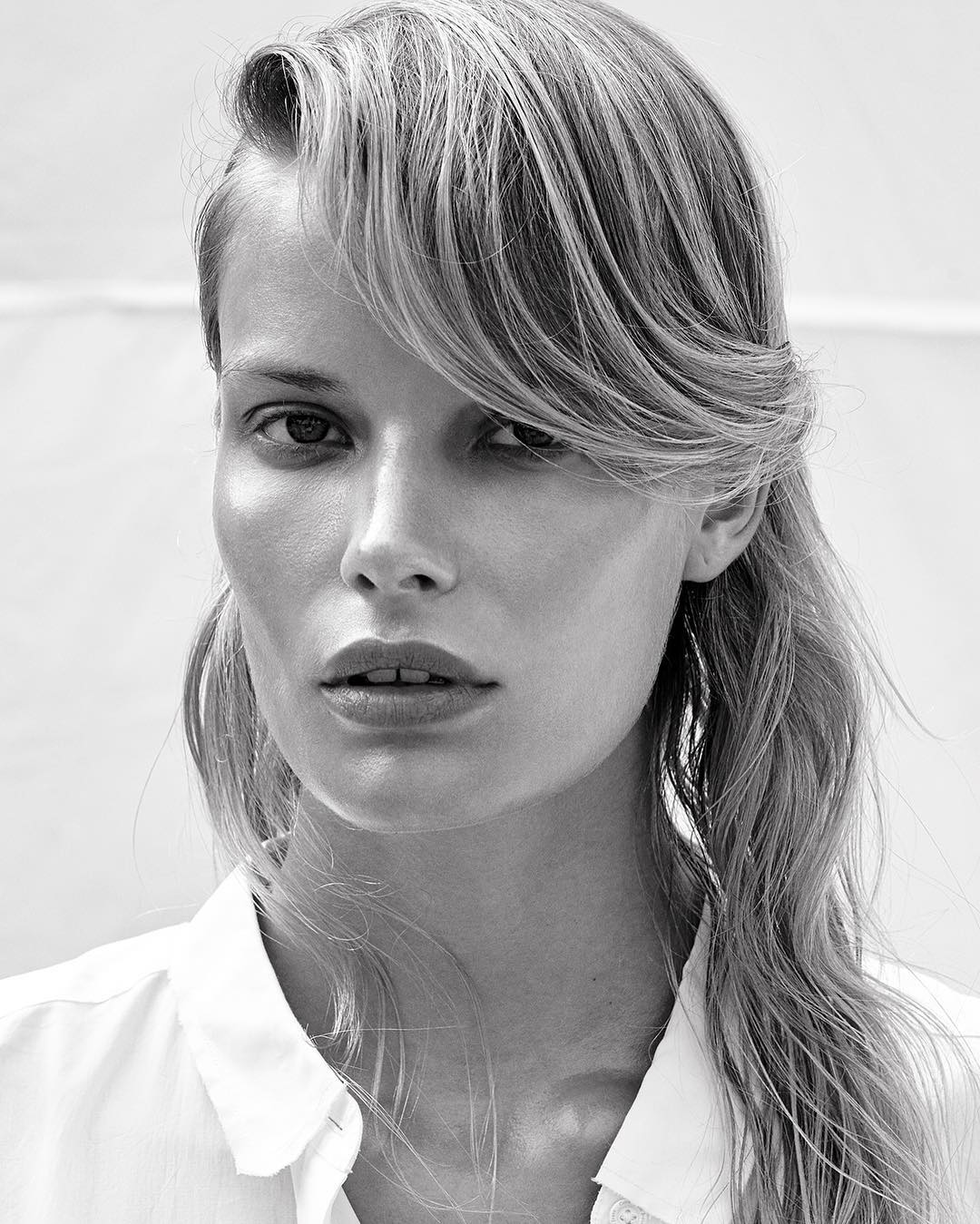 Distinctive features are always something to smile about and front-tooth gaps combine quirk, insouciance, and charm. Blohm is one of an elite coterie of models like Lara Stone, Georgia May Jagger, Lindsey Wixson, Jessica Hart and Abbey Lee Kershaw known for their lovely gap-toothed grins. Has she ever faced criticism (like many other models) or having to deal with overzealous Photoshoppers retouching her teeth at the beginning of her career, I ask, half-expecting a Yes. "Never. Since I started, I never had problems with it,' she enthuses. In school, on the other hand, I hated my teeth and people were making fun that they weren't 'perfect'. But I think that's what teenagers go through to eventually feel comfortable with who they are. It all takes time."

At present, Blohm lives in New York in full nesting mode but at times she misses Germany. "I love the energy and the people of New York and that everything is always available 24/7 but there are times when I feel drawn back to Germany especially when I realize that I'm missing out on an important event. Usually, my Mom is pretty good with making my homesickness go away after a little FaceTime conversation."

When she's not busy, Blohm spends her time running, and admits to 'working out' in the gym. There's also a cycling clique she exhausts herself in. "I love going for a nice outside run. It keeps my mind off things and I always feel happy afterwards," she adds.

Modeling it appears, comes easily and Blohm has spent time with some of fashion's leading editors and photographers including Peter Lindbergh, Guy Lowndes, and Liz Collins who heap unusually genuine praise on her and rave about her editorial potential. "She defies all stereotypes, personally and professionally. Her combination of physical strength and femininity is part of what sets Alena apart from most others," says Negeva Norval-Dogra at Model Management Hamburg, Germany. "She is comfortable on the highest of heels and equally on the largest of motorbikes. She is the quintessential modern woman." 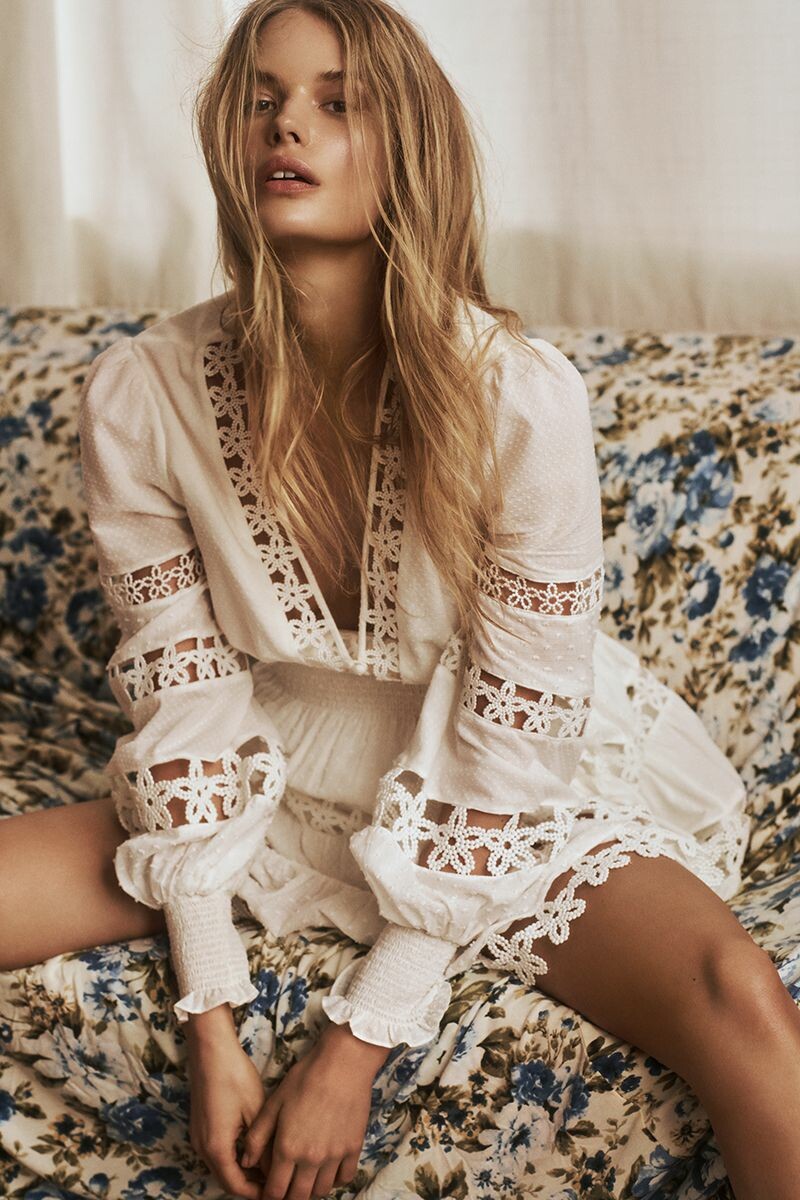 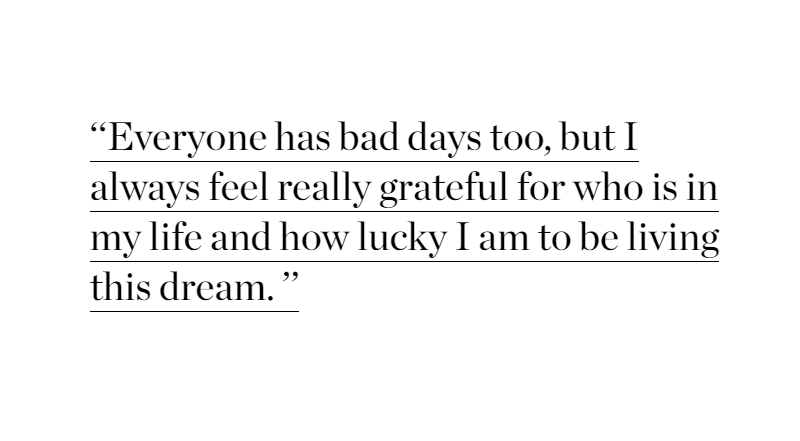 Blohm's star has truly been in the ascendance - as one of Europe's sought after faces she boasts 200k Instagram followers. However, she tries not to think about it too much. "It (Social Media) has such a big role in our lives but sometimes I think it just gets very overwhelming."

To understand what Alena Blohm is all about, you need to meet her in person. Not only does she possess that beautifully raw and authentic look, but she also has the personality to match. One of the strongest take-homes from my interview with Blohm was her steely determination and cheerful disposition. She has this radiance that just bounces through the room and is effortlessly cool and is always smiling. Perky and upbeat, with a soulful gaze, and an unwavering passion for everything she approaches, she has the kind of buzz most models only dream about. But, despite this envy-inducing life, she is thankful and fulfilled. "Everyone has bad days too, but I always feel really grateful for who is in my life and how lucky I am to be living this dream," she says smiling.