Singapore is a style and luxury capital home to a plethora of fashion magazines. Less known is the existence, albeit briefly of a local edition of Vogue - Asia's first. Now, through the power of Instagram Vogue Singapore has been unearthed. These remnants reveal more than just a treasure trove of mid-nineties chic and illustrate an almost parallel universe where Asian models took center stage. A moment in Vogue history when the rules of the Caucasian-centric world of high fashion were discarded in favor of something more representative.

Published between September 1994 and January 1997, Vogue Singapore began as an offshoot of Australian Vogue and produced 29 issues. Its first cover featured Chinese born Twin Peaks star Joan Chen, lensed by leading Singaporean photographer Russel Wong. Wong vividly remembers that auspicious moment. 'I was the first photographer they approached. The editor knew that I was close to Joan and did most of her photography so they asked me if I could ask her to do a cover for them. She was Asian of course, a big movie star and this was a perfect choice for everyone. I will always remember that cover as it was the first one for Singapore and also for me. What better than to share it with a close friend and make history together.'


Sadly, no comprehensive archive of the magazine exists and some issues are considered lost. Although the magazine failed to find a foothold in the competitive fashion magazine market, its legacy is now being carefully documented by the Instagram account voguesg. Behind this effort is Warren Hallett, who has uncovered many of the magazine's long-lost covers and editorials. The goal for the account is simple he says, 'I set up the Instagram account to find all 29 covers. It would be nice to have all of them in one place.'

Hallett was surprised to learn that Vogue was ever published in Singapore, 'I'm sure many Singaporeans, young ones especially, don't know that once upon a time, they had Vogue - the first in Asia.' 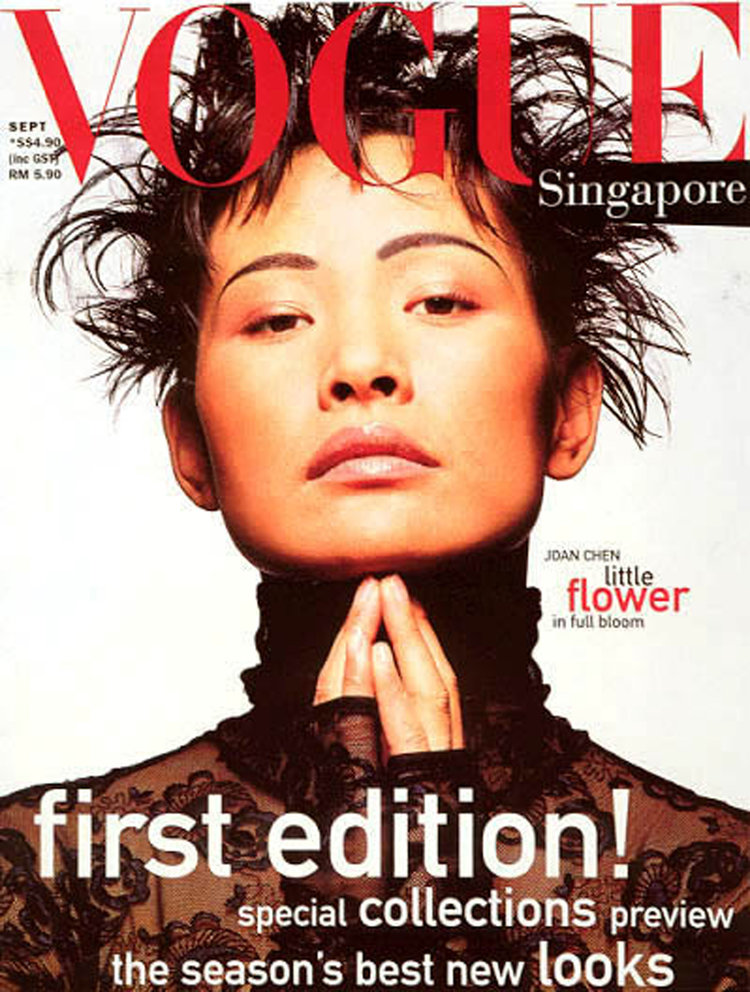 
From scouring fashion forums and blogs to the occasional tip-off by a collector, Hallett's commitment to archiving the title has won him fans within the fashion community. Among them, Malaysian born model Ling Tan, who at 43 recently made a splash at Alexander Wang's Fall show in New York. She fondly recalls 'my memory of the Vogue Singapore photoshoot was the photographer teaching me to swear!' The photographer? British born Tom Munro, who has since lensed campaigns for Moschino and Dolce & Gabbana. Model Natane Boudreau, an industry veteran by her teens and a regular for Calvin Klein throughout the 1990s featured on Vogue Singapore's cover twice. She recalls 'I remember shooting with Tom Munro who was emerging as a young talented photographer and we shot two cover tries that both ran! I loved wearing that iconic red silk shirt for the March cover from Tom Ford's breakthrough Gucci Fall 1995 collection.' 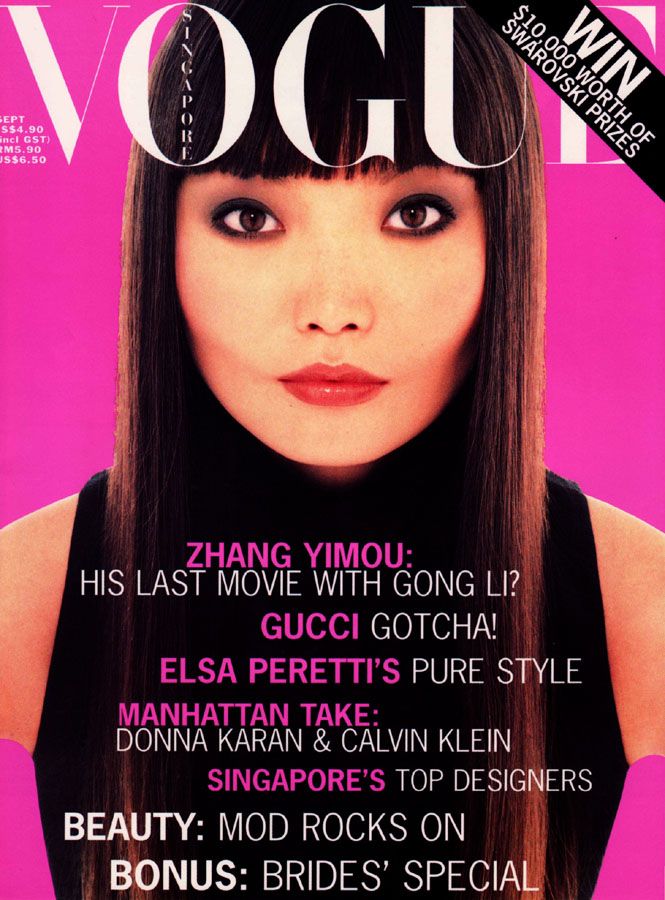 
Early issues heavily betray the magazine's lineage to Australian Vogue, although as it progressed a distinct aesthetic began to emerge. Fresh faced Asian models beam out from covers. Perhaps the most fascinating aspect of the short-lived magazine was its dedication to promoting Asian and Eurasian faces, then considered a novelty in high fashion. This well preceded the more recent push for diversity according to Boudreau. 'Vogue Singapore was actually ahead of the times by having ethnic diversity on their covers since the beginning.' Long before the likes of Devon Aoki and Ai Tominaga, Vogue Singapore bestowed covers on many leading models from across Asia, often their only instance as a Vogue cover girl. Among them, Thai model Rojjana Phetkanha, the first Asian face of Chanel, and Jenny Shimizu, the Japanese American model, and actress favored by Calvin Klein and Prada. Wong explains 'It was a conscious decision to use Asian models as that set us apart from the other editions of the magazine in other regions.'


Tellingly, when Vogue was eventually launched in Taiwan, South Korea, and Japan, their covers were normally reserved for more famous western models. It wasn't until the launch of Vogue China in 2005 and the arrival of editor Anjelica Cheung that the concept of Asian supermodels was truly revived. Sensing the need for more models who represented Asian concepts of beauty and Asia's growing importance in the luxury goods market, Cheung made it her mission to create what she considered to be China's first supermodels. She diligently championed local models in the magazine's pages and strongly encouraged international photographers to shoot them for it. This initiative helped launch the international success of Du Juan and China's highest-paid supermodel - Liu Wen. What Cheung might not have realized was, over a decade earlier a small magazine in Singapore was making similar strides to promote models who better reflect the region's identity. 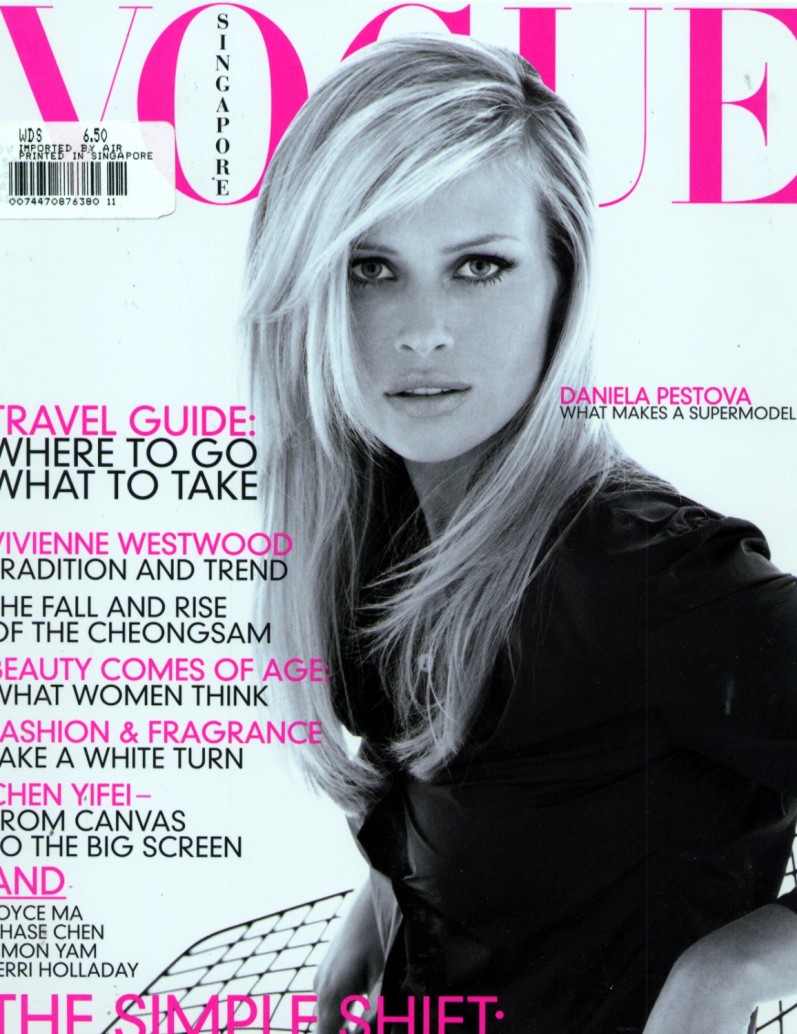 Fast forward to today and over 40% of luxury retail turnover now comes from Asia, though Asian models are still largely underrepresented in high fashion. Now at least, thanks to dedicated archivists like Hallett, the surviving issues of Vogue Singapore remain, a memento of a largely forgotten but extremely significant moment in fashion. As current stars like Wen, He Cong, Fernanda Ly and Issa Lish carry the torch for Asian and Eurasian models and continue to break barriers and score Vogue covers, Boudreau sees a tangible shift. 'Since the early nineties, I think there has been a drastic change. We've come into a time of consciousness in embracing and standing for diversity. I believe and trust our voices will continue to be even more inclusive in fashion.'

Share Me
#Tags fashion models magazines Vogue Singapore Joan Chen Russel Wong Warren Hallett
+ Report an error
Ready for the next big name?
A central authority for the fashion and luxury industry. Since 1998.