When it comes down to looking every inch the head turner, it is quite plain to see that Miranda Kerr has got it all nailed down to perfection, if not close, every time she attends a fashion affair. And the world class supermodel from Australia gave everyone around a look see of exactly how it is done as soon as she made her presence known at the grand inauguration of a store for the Aussie high end label Zimmermann earlier this past week in the sunny Los Angeles, California. 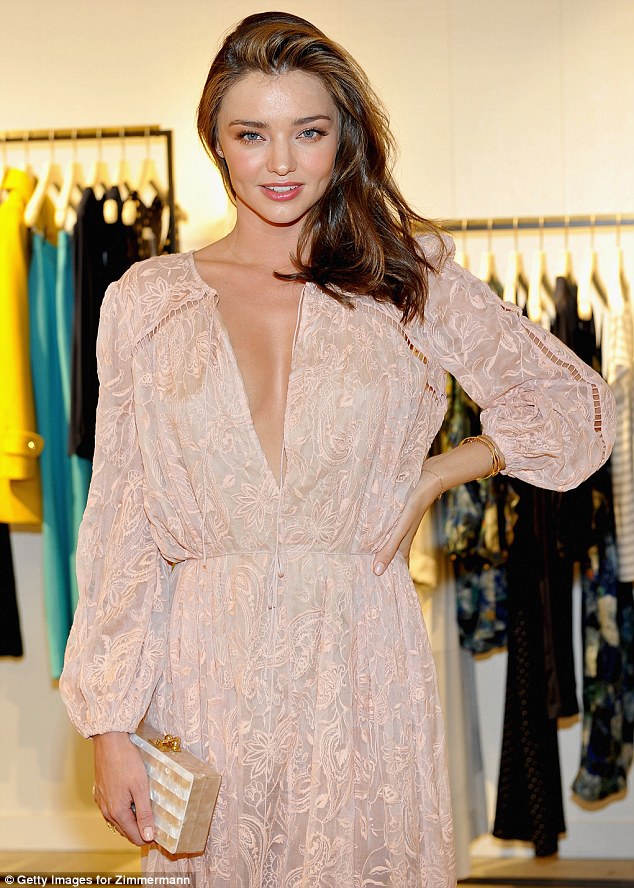 With the noted Australian clothesmaking sisters Nicky and Simone Zimmermann opening the doors to a brand new boutique shop for their namesake brand not too long ago, there was absolutely not a chance that Miranda Kerr would miss out on the opportunity to show her full support to one of her native country's most well known designer brands first hand - and demonstrate her captivating quality while at it. Zimmermann, which specializes in swimwear and ready to wear, is also one of the earliest companies that ever enlisted the blue eyed brunette to strut her stuff for back when she was just taking her first steps with her modeling career.

Set in to motion in the year nineteen ninety one, the fashion giant from Down Under - which is currently on a quest to extend its mark to the rest of the world as we speak - already has a total of seventeen establishments across Australia and has opened five additional ones in the United States. The most recent of which is impressively situated at the iconic Melrose Place in the trendy West Hollywood part of town and mirrors those back home with crisp white interiors, a rustic inspired floor and picturesque archways - location where Kerr made her way to on the night of Wednesday (the twenty ninth day of July).

And it should come as no surprise that the thirty two year old beauty looked nothing short of breathtaking upon making an entrance at the newly inaugurated three thousand square foot business. With her lustrous caramel brown strands flipped to one side, and her natural beauty enhanced by applying only a subtle amount of makeup in neutral tones, the former Victoria's Secret Angel showed up at the flagship store presentation donned, expectedly, in one of bohemian chic brand's very own creations from their latest offering.

Kerr's garment of choice was a near transparent georgette dress dubbed "Nightmarch Vine" in pale pastel pink which was completely covered in floral silk embroidery and fit relaxed on her slender frame, while a dainty drawing string at the halfway point did its part in putting accent on her svelte mannequin waist. The ethereally flirtatious Zimmermann number also featured billowing sleeves, and an asymmetrical floor skimming handkerchief hemline, but a very low cut v neckline surely had to be the main focal point of the frock.

Finding herself at the risk of a wardrobe malfunction only added to the jaw dropping factor, as her unfastened decolletage put a sizable portion of the Sydney born bombshell's braless cleavage on full display. The five foot, nine inch dazzler accessorized the attention grabbing look - which was taken from the luxury fashion house's Resort 2016 collection - with a few delicate gold bangles, as well as a complementing pastel toned clutch case, while a nude set of double strapped, high heeled sandal pumps boosted some extra inches to her already statuesque height.

"The Zimmermann prints are so iconic and original. They're feminine and effortless. I've grown up with them," Kerr said while enjoying some cocktails at the shop's launch party. "They were one of the first designers that I ever worked for," the eye catching taurus recalled, pointing out that she was "probably sixteen or seventeen" at the time when she initially set foot in one of the Sydney based label's runway spectacles back home. Nicky Zimmermann reminisced of the time as well. "It's really nice to reconnect," she said.

Dressed in a see through puffy blouse and a high waisted skirt which were emblazoned with a monochrome floral print, the darker haired of the two Zimmermann siblings spoke of the brand's new location in the west coast of the United States. "L. A. is such an important place to be for fashion, with all the celebrities, and it suits our brand," said Nicky. "Plus, I love it. I've been coming here for twenty years. I love the vintage shopping. It's nice to come from New York and the intensity there and stop off here to get back into the Australian mode on the way home."

Meanwhile, her blonde co founding sister Simone - who had opted to wear a vertical pin striped, pale olive colored, partially sheer dress in full length which was cinched at the waist with a black belt and featured embroidered detailing across the shoulders and upper chest area - explained; "We've had our eye on this spot. We're always looking for something that's true to its surroundings. It looks very L. A."

The American top model Chanel Iman was also one of the stylish invitees in attendance at the Zimmermann store's gathering. The twenty four year old mannequin turned actress was most certainly dressed to impress in one of the brand's Autumn / Winter 2015 ready to wear creations; a very sexy wine colored number that had long sleeves with a semi cape like detail, a turtleneck and a large keyhole cut out at the center of the torso for some ample cleavage exposure, with the garment's dramatic floor sweeping skirt split apart by some thigh high slashes that showed off her long and toned legs rather effortlessly.

With her dark raven locks divided at one side and slicked down over her collarbones in a sleek style, the Atlanta, Georgia born stunner put the finishing touch on the femme fatale look with a set of glistening silver drop earrings and made her lengthy five foot, ten inch height appear to tower even further over the rest of the party guests with a pair of black high heeled sandal pumps with criss cross straps at the toes.

By Theo
Share Me
#Tags Miranda Kerr Chanel Iman Store opening Zimmermann Melrose Place
+ Report an error
Ready for the next big name?
A central authority for the fashion and luxury industry. Since 1998.