Irina Shaykâ€™s career seems to be moving from strength to strength.
The girlfirend of Cristiano Ronaldo, who fronts the 2011 Sports Illustratedâ€™s annual Swimsuit Issue, cried tears of joy as the cover was revealed on The Late Show with David Letterman last night.
She was accompanied on the show by a group of other swimsuit models, but only one could nab the coveted spot.
Backstage, the group gathered, and Miss Shayk was pictured laughing and wiping away her tears after the TV host made the shock announcement.
The news had still yet to sink in this morning, as Miss Shayk appeared on breakfast programme The Today Show. 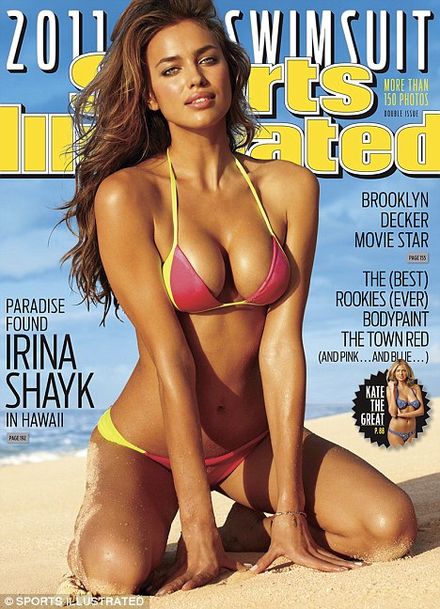 'To be on the cover of Sports Illustrated is a dream come true,' she said. 'We Russians, you know, we know all the secrets, but I didn't know I was landing on the cover of Sports Illustrated, and it was so surprising to me. I was in shock; I was crying'.
The model posed for the provocative photo shoot months ago in Hawaii and the Philippines at a number of pristine beaches.
And she clearly made an impression on the magazineâ€™s editor in her pink and yellow Sauvage by Elizabeth Southwood bikini to land the cover.
The 25-year-old accompanied her skimpy swimsuit with an Ettika bracelet as she accentuated her curves with an array of poses for photographer Bjorn Looss.
But it wasnâ€™t until last night that she found out that her photo shoot was picked to adorn the magazineâ€™s cover.
Irina said on the U.S show: â€˜There were 10 models there to do (Lettermanâ€™s) Top 10 List, and nobody knows until the last minute who the cover will beâ€¦ And then I saw it, and I couldnâ€™t believe it.â€™
The nine other swimsuit models who appeared on the show were Anne Vyalitsyna, Julie Henderson, Kate Upton, Alyssa Miller, Chrissy Teigen, Hilary Rhoda, Genevieve Morton, Damaris Lewis and Izabel Goulart. 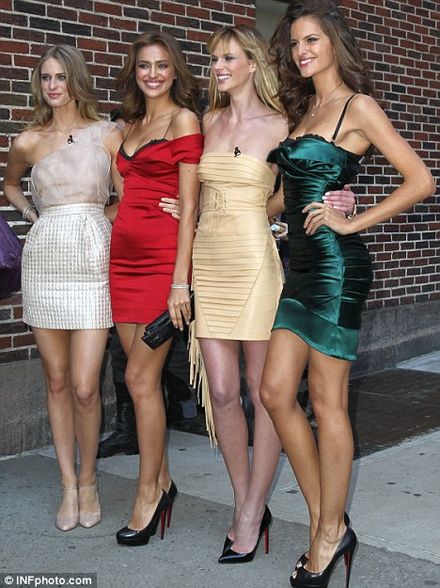 During her appearance on the Late Show, Irina proved she looks just as good in a mini-dress as she does in a swimsuit as she arrived in a skimpy red silk dress.
The lady in red accompanied her outfit with classic black Christian Louboutins and a matching black clutch.
And there to support the model was her beau Ronaldo, who strolled into the Ed Sullivan Theater in a brown leather jacket and aviator sunglasses.
Although the latest edition marks the fifth time Irina has appeared in the magazine, she has become the first Russian cover model for Sportâ€™s Illustrated Annual Issue.
Before the 2011 Sports Illustrated Swimsuit Edition official unveiling on Letterman, photos of Shayk were leaked on a New York City billboard for extra publicity.
The week before the unveiling, posters of Irina, Brooklyn Decker and Anne Vyalitsyna were placed around the Big Apple to generate curiously over who would be the 2011 annual cover girl.
Irina was discovered while on a train to Moscow in 2004 and has since made a big impression on the modelling industry.
Read more: dailymail.co.uk
Share Me
+ Report an error
Ready for the next big name?
A central authority for the fashion and luxury industry. Since 1998.