Among the world's great jewelers, Moussaieff of London has one of the longest family traditions. The business was started by Shlomo Moussaieff in the 1850's in Bukara in Uzbekistan. Shlomo was a rabbi as well as a trader in natural pearls, and he emigrated to Palestine at the end of 19th century, where he was one of the founders of the famous Bukharian quarter in Jerusalem. Shlomo had 7 children. One son, Rehavia, settled in Paris and established a business there trading in fine gems. In 1963, Rehavia's son, named Shlomo after his grandfather, opened the first Moussaieff store on Park Lane in London.

Shlomo ran the business in partnership with his wife, Alisa. In 2004, Shlomo retired and left the operation to Alisa and their three daughters, each of whom has a role in the business. Mrs. Moussaieff, now in her 70's, oversees everything from gemstone acquisitions to designs to sales. In addition to selling diamonds and colored gems, she also offers natural pearls. Moussaieff is one of the few jewelers who still work with natural pearls, which are now found primarily in estate jewelry. Moussaieff purchases antique pieces and uses the stones and pearls in new designs.

The Moussaieffs, like Laurence Graff, are known for paying top prices for very rare gems at auction. The Moussaieffs recently paid $7.98 million for a 6.04 carat flawless blue diamond. The price of $1.32m per carat, paid at Sotheby's auction in Hong Kong, beat the previous record of $926,000 per carat. The previous record was held by the famous Hancock Red Diamond.

Moussaieff also owns one of the most valuable red diamonds in the world, the Moussaieff Red. Whereas the Hancock Red is less than 1 carat, the trillion-cut Moussaieff Red is an amazing 5.11 carats. Moussaieff purchased the red diamond in 2001 or 2002 for an undisclosed price. 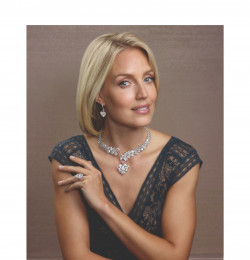